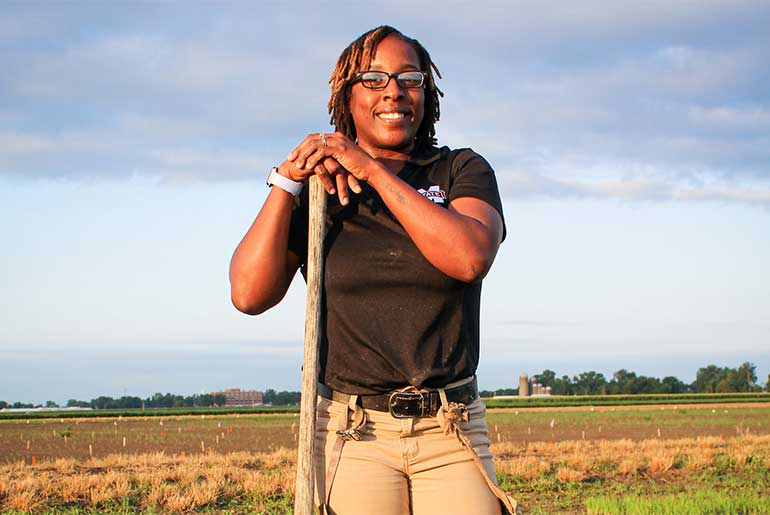 The phrase "Life's a marathon, not a sprint" certainly isn't lost on Tameka Sanders.

The research associate II at Mississippi State's Delta Research and Extension Center in Stoneville works fulltime, is pursuing a doctoral degree in plant and soil sciences, has two young daughters and runs marathons for fun in her spare time. Her passion for research, love of the outdoors and drive to show her daughters they can grow up to be anything they want motivates Sanders to pursue excellence without limits.

"My daughters motivate me to keep working toward my Ph.D. I want them to be able to see that anything is possible regardless of your gender or race. If you put your mind to it, you can do it," she said. "Growing up, I didn't see many women in leadership roles, and seeing Black women in those roles was even rarer. I can show my daughters, 'Hey, I did this despite life's challenges, so you can do it, too.'"

While the Greenville native didn't grow up in agriculture, she always had a love for the outdoors, playing any sport that allowed for time outside, which eventually parlayed into running marathons.

A biology degree earned from Delta State University in 2009 solidified her love of research, and she began as a research associate at the USDA in 2010 before moving to Mississippi State in 2014. She said Extension/Research Professor Jason Bond took a chance on her since she didn't have a background in agriculture, and she's never looked back.

"I told Dr. Bond that I didn't have an agricultural background but that I was open to learning anything he was willing to teach me. My initial role was in the office helping him and his team process data from experiments. I told him I was interested in the field work as well and he told me to go for it. Now agricultural research is something I love," she said.

As a research technician in the Mississippi Agricultural and Forestry Experiment Station, Sanders assisted Bond and several of his graduate students on research projects. After a few summers encouraged by Bond and the students, Sanders decided that since she was already doing the work, she might as well get credit for it. She started working on her master's in the College of Agriculture and Life Sciences in 2017. After graduating in 2019, she moved straight into her doctoral degree program.

Sanders studies how off-target movement, known as drift, of the herbicide paraquat impacts rice in various stages of its life cycle. She hopes to give rice farmers a road map of what they can expect if their crop is exposed to the herbicide.

"My goal is to answer questions that will inform best practices for farmers now and in the future. I like that my research will help in a practical manner not only in paraquat but also in cases of drift caused by other herbicides," she said.

As she begins her last academic year approaching the finish line of her Ph.D., with an anticipated graduation date of May 2022, Sanders encourages anyone pursuing a life goal to dream big, step outside of their comfort zone and embrace something even if they think it might be out of their reach.

"The only limitations you have in life are the ones you set for yourself," she said.