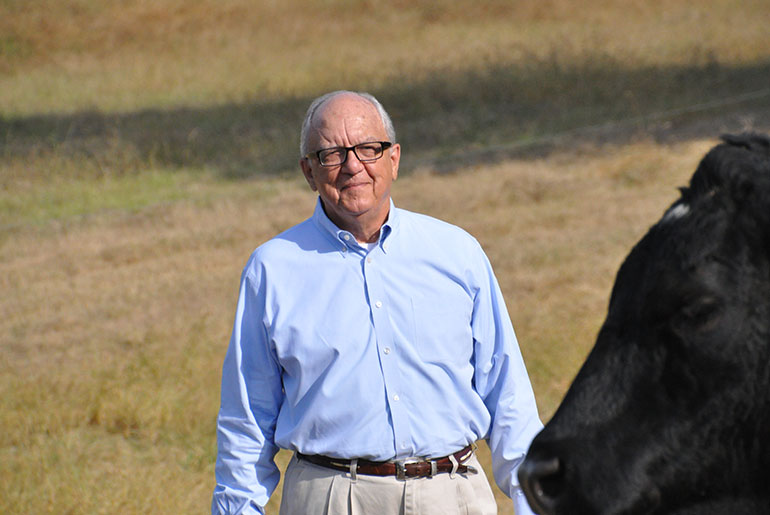 Being a cattleman is a world Sammy Blossom has always known. The 1970 animal science alumnus who grew up on a small cattle and sheep farm in Scott County, Mississippi, would end up serving the state's cattlemen for 16 years as executive director of the Mississippi Cattlemen's Association.

As executive director, Blossom was in charge of the day-to-day operations of both the Mississippi Cattlemen's Association and the Mississippi Beef Council. The association addresses local, state, and federal issues that impact the long-term viability of Mississippi cattlemen while the council administers programs of beef promotion, education, research, and consumer and industry information.

Blossom said his favorite part of the role was the chance to meet with cattle farmers regularly.

"With about 14,000 cattlemen and women throughout Mississippi, I had a chance to meet a lot of them over the years. I loved visiting farms and seeing what the operations were like," he said.

Blossom's work included lobbying for issues important to cattlemen at the state and federal level and helping the 60-plus county cattlemen's associations be successful. The team organized annual meetings and events, published a monthly magazine, and ran the Beef Barn concession stand at the Dixie National Livestock Show and Rodeo and the Mississippi State Fair. Blossom retired in 2016 and received the Distinguished Service Award from the Mississippi Farm Bureau Federation, the organization's highest honor, that same year.

He considers his work with the Mississippi Cattlemen's Foundation as one of his proudest accomplishments. In 2000, Blossom helped the organization fund a scholarship for the children and grandchildren of the state's cattlemen and women.

"Through the Mississippi Cattlemen's Foundation, money generated from the Mississippi cattlemen's car tag goes into an endowment that several people have funded. Earnings from that endowment allow us to award about $65,000 in scholarships annually that goes to about 50 students each year," Blossom said.

Prior to his time with the Mississippi Cattlemen's Association, Blossom managed cooperative supply stores in Louisiana and Mississippi for 22 years, spending 11 of those years at the Lowndes County Co-op in Columbus. It was there that his journey to executive director began when he volunteered to reenergize his local county cattlemen's association in the late 1980s.

"We moved back to Lowndes County in 1987. Joe Love was our county agent with the MSU Extension Service and he and I revived the cattlemen's association in our area. I went on to stay involved and was an area vice president and then served as state president. In 1998, I joined the staff."

Blossom, who managed cattle operations in Mississippi and Kentucky early in his career, has always kept cows. His participation in the FFA kicked of his journey to Mississippi State, where his time on the MSU Livestock Judging Team is what he remembers most fondly.

"The high point of my years at MSU were my experiences on the livestock judging team. The friends I made there and the trip to the national judging contest in Chicago are my best memories of college," he said. "The judging team is a great way for people to learn new skills, not just judging cattle, but public speaking, decision-making, and how to defend your ideas. I got a lot out of it and I still have friends today that I met during my time on the team."

Both FFA and livestock judging left such an impression on Blossom, that he continues to pay it forward, mentoring youth throughout his life, serving on the 4-H Foundation Board during his tenure with the Mississippi Cattlemen's Association, and still helping with FFA to this day.

"It's important for young people to be involved in these programs. They build a lot of life and leadership skills and gain a knowledge of hard work and dedication. With livestock programs they have to be responsible every day for the care, feeding, and grooming of those animals. It does something to build skills you can carry throughout your whole life," he said.