Sisters establish scholarship in memory of their father 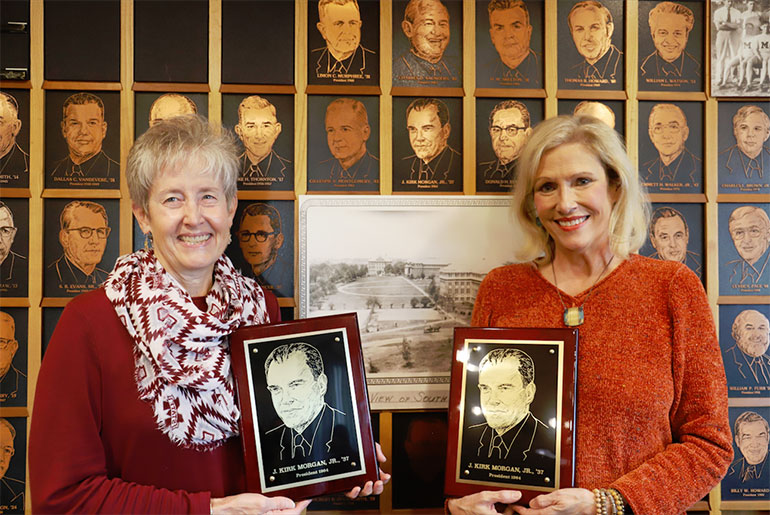 Sisters and Mississippi State alumnae Betty Morgan Benton and Jane Morgan Read have endowed a scholarship in memory of their father, J. K. Morgan, Jr. The sisters' love for their father, his love for and service to MSU, and his allegiance and service to our country inspired them to establish the J. Kirk Morgan Endowed Scholarship in the College of Agriculture and Life Sciences.

A native of Marietta, Mississippi, Morgan was a 1937 graduate of then-Mississippi State College, receiving a degree in business and agricultural economics. Following graduation, Morgan worked in the agricultural industry. In 1941, he enlisted in the United States Naval Reserve and served in the Pacific during World War II, participating in amphibious troop landings at Guadalcanal, adjacent Solomon Islands, Iwo Jima and Okinawa. He received a Purple Heart for wounds he sustained in 1943.

In addition to his career, Morgan continued his commitment to service. He was a commanding officer of the Naval Reserve Surface Division in Jackson. In 1962, he was appointed a Captain in the United States Naval Reverse. He was Commander of the local Veterans of Foreign Wars Post and State Director of Selective Service for Mississippi.

At his alma mater, Morgan played an integral role in raising funds for the construction of the Chapel of Memories on campus and assisted in the initiation of the University's faculty awards banquet. He served as the National President of the MSU Alumni Association in 1964.

Morgan passed away in 2000 after a lifetime of service and leadership. He and his wife, Annie Haughey Carter Morgan, had three daughters and three grandsons. Daughters Benton, a 1973 College of Arts and Sciences graduate, and Read, a 1979 College of Education graduate, as well as the Morgans' three grandsons and sons-in-law graduated from Mississippi State.

The J. Kirk Morgan Endowed Scholarship is to be awarded to full-time students in the College of Agriculture and Life Sciences who have demonstrated academic achievement, leadership qualities and financial need, with preference given to veterans and U.S. service members.

For more information on the scholarship and supporting the MSU College of Agriculture and Life Sciences, contact Will Staggers, director of development for the college and the MSU Extension Services, at 662.325.2837 or wstaggers@foundation.msstate.edu.