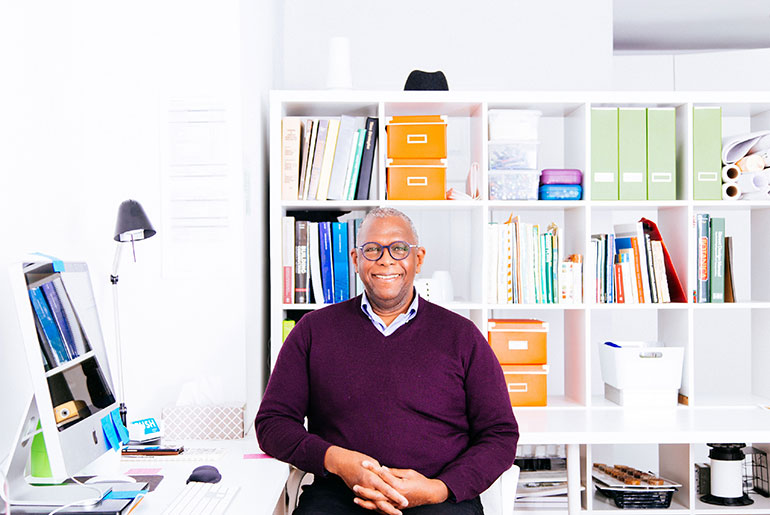 Glenn Larue Smith in his office.  (Photo by Kevin Assie)

Glenn LaRue Smith is a natural born artist. His medium, however, extends beyond a traditional canvas, encompassing whole landscapes in cities across America.

The 1974 landscape architecture alumnus has enjoyed an expansive career in both private and public practice. He's also a well-respected academic and Harvard Fellow. Now as a principal of Washington, D.C.-based PUSH studio, Smith shapes urban landscapes in the Capital City and beyond, all while helping mentor the next generation of African American landscape architects.

The Vicksburg, Mississippi native is a first-generation college student along with his five siblings. He said early visits to big cities spurred his love of urban landscapes.

"My older sister was the first to attend college and later she practiced law in Detroit, Michigan. We would visit her during the summer. It was during these visits and also visits to St. Louis, Missouri to see my older brother that I grew to understand the city as a much more diverse landscape than my hometown," he said.

While Smith was inclined toward art and architecture, he chose engineering at the behest of his parents since there wasn't an architecture program yet available in Mississippi. After a year studying engineering, however, Smith realized the profession wasn't a fit.

"I combed through the MSU program catalogue until I found landscape architecture, which I had never heard of before. It was the many art option courses and welcoming discussions with the program director and faculty that convinced me to join the program," he said.

While he says that the work study jobs and 15-hour credits per semester to make up for the lost engineering semester were difficult, he pointed out that it was a welcoming environment where fellow students readily accepted and included him, despite the racial tensions prevalent at the time.

After graduation, Smith worked for the Vicksburg District of the United States Corps of Engineers before pursuing a Master of Landscape Architecture at the University of Michigan at Ann Arbor.

It was there that he delved into the principles of urban design, writing a thesis about how pedestrians interact with an urban environment and how designers should design to accommodate physical movement and optical perception.

Smith, who has worked on projects across the country and in different parts of the world, said his experience as a minority greatly informed his vast and varied career.

"My diversity of work experience was not only based on my curiosity but also because as an African American, I always had to prove my skills and worth. Although over the past twenty years, my portfolio and confidence has diminished this need to 'prove or be proven' as a professional," he said.

Internationally, Smith worked on such diverse projects as an amusement park in Seoul, Korea; cemetery in Chile; and hotel plaza and courtyards in Singapore. Stateside, he's designed numerous parks and recreational master plans in California and championed environmental justice in New York, among many other endeavors. He notes his tenure as project manager for the Southbank Riverwalk in Jacksonville, Florida as a significant turning point in his career. He helmed the design and build of the iconic boardwalk while working for a New Orleans, Louisiana-based firm.

"It was a great confidence builder to be involved in the design of every space, nut, and bolt in collaboration with multiple allied professionals for a 1.1 mile boardwalk project completed in 1985," he said.

In the public sector, Smith said his time as acting deputy director of the Prince George's County Redevelopment Authority in Maryland taught him a lot.

"I managed a staff of thirteen planners on multi-million dollar development projects," he said. "It taught me the value of team work, listening, support of staff needs, and honesty in all interactions."

Smith also served in various academic positions throughout his career. He was chair of the landscape architecture department in the School of Architecture and Planning at Morgan State University in Baltimore, Maryland. He also served as the interim director of the landscape architecture graduate program in the School of Architecture at Florida A&M University in Tallahassee, Florida. He's held visiting or adjunct professorships at Rutgers, Virginia Polytechnic University, and Columbia University, among others. While he began his career in academia at his graduate alma mater, the University of Michigan at Ann Arbor, he said his love of all things urban took him to New York City where he taught at the City College of New York.

"While teaching at City College, I worked on various community-based projects in Harlem with the City College Architectural Center, a non-profit within the school," he said.

A Van Alen Institute Projects in Public Architecture Grant allowed a group of professors, including Smith, to work with students in a special seminar course centered on environmental justice. Their efforts culminated in a publication, "Environmental Justice Is," and an exhibition at the Van Alen Institute.

"Environmental justice empowers underserved communities of color with the knowledge of good design alternatives for housing, open space, and play areas," Smith explained. "By knowing the right questions to ask related to design, these communities can ask for the maximum in terms of upgrading their neighborhoods instead of the minimal investments."

It was at City College that Smith learned about the Loeb Fellowship in Advanced Environmental Studies in the Harvard Graduate School of Design. His work in environmental justice became the topic of his application and he was selected as a 1996-1997 Loeb Fellow.

Smith said the fellowship provided a year of study and enrichment including opportunities to audit any Harvard course and participate in weekly seminars all while working on a project that culminated in a one-day symposium he organized titled "Environmental Justice Is."

"My time was spent attending workshops and lectures at the Kennedy School, art and film theory courses, and African American history and literature courses under Cornell West and Henry Louis Gates," he said.

One aspect of the fellowship Smith particularly enjoyed were the weekly dinners, part of a longstanding tradition of the program, in which the fellows hosted notable academics, professionals, and dignitaries as guests.

"My most memorable dinners included Michael Dukakis, Julia Child, and John Kenneth Galbraith," Smith remembered. "Another highlight was receiving a letter of congratulations on the fellowship from then-Mississippi State University President Donald W. Zacharias during my first month at Harvard."

One of those community projects centers around memorials.

"We won a competition to design the Stafford County Armed Services Memorial located in Stafford County, Virginia, which required our team to incorporate elements of six preliminary designs done by local high school students. This requirement, while challenging, helped enrich the memorial with a local spirit," he said.

On the sustainability front, Smith said the firm has been involved in competitions that marry passive energy sources and art installation through the Land Art Generator Initiative (LAGI).

"Our first competition entry in 2014 was a design for a site in Copenhagen, Denmark, which was one of fifty out of three hundred entries selected for publication in a competition book titled New Energies: LAGI Copenhagen. In 2017, PUSH studio was short listed as one of three teams to design an energy generating sculptural park project for Willimantic, Connecticut as part of the LAGI competition," he said.

"The program requires developers to meet a GAR score based on zoning district designation with green infrastructure such as green roof, green screen, living vertical walls, and permeable paving. We are currently looking into how the firm can tract these various project green roof systems in terms of their impact on water sustainability and wildlife corridors," he said.

In addition to a lustrous career as both a professional and an academic, Smith has made a point to serve as a mentor. He founded the Black Landscape Architects Network (BLAN), which is a LinkedIn Social platform for black landscape architecture students and professionals to communicate.

"Because the black population in landscape architecture remains less than one percent, it was important to organize a platform that allowed a way for black landscape architects to communicate," Smith said. "The network has just over 110 members, which also includes international members based in Africa. We often work in conjunction with ASLA to share ideas regarding recruitment efforts within the academic and professional sectors."

"Often students hinder themselves because of doubts as to how they can achieve goals. Not taking chances can be a great loss in building a career. I try to instill in them the confidence to work toward attaining their ultimate goals," he said.