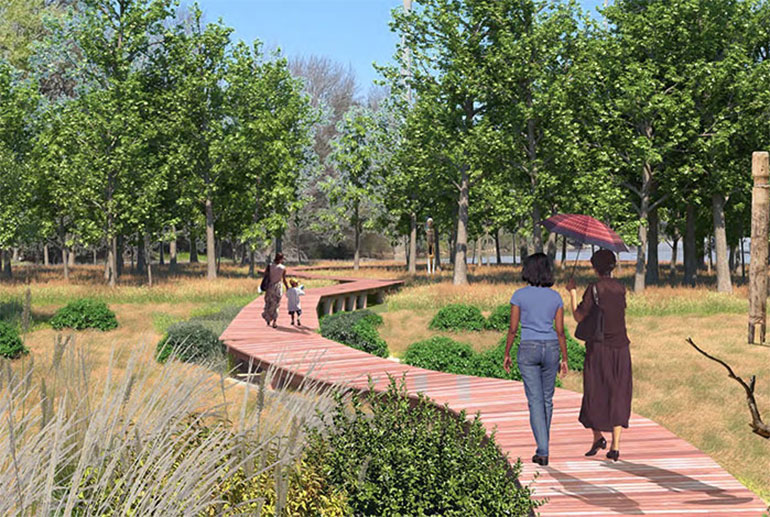 Students enrolled in both MSU urban design and planting design courses have conceptualized plans for the Africatown Connections Blueway and for landscaping at the site’s community center. The Blueway, a water and walking trail network, includes 14 points of interest, five of which the National Park Service asked the landscape architecture students to design. (Photo by Submitted)

Mississippi State landscape architecture students and faculty are being recognized for their role in the design of recreational areas within historic Africatown, Alabama.

Development of the Mobile County site, where the last African individuals in the Atlantic slave trade landed in 1866 on the schooner Clotilda, has seen a resurgence since the ship's discovery earlier this year in Mobile Bay. Hurricane Katrina destroyed much of the town's infrastructure.

Students enrolled in both MSU urban design and planting design courses have, for the past two years, conceptualized plans for the Africatown Connections Blueway and for landscaping at the site's community center. The Blueway, a water and walking trail network, includes 14 points of interest, five of which the National Park Service asked the landscape architecture students to design. The service's Rivers, Trails and Conservation Assistance Program has funded the project.

"It has been an exciting project for the students to be part of as they were honored with their plans being sent to the City of Mobile planning office, the Alabama State Legislature and several agencies in Washington, D.C., including the Smithsonian Institution, a sponsor of several dives into Mobile Bay that unearthed the Clotilda. The students' work really has painted the picture for what Africatown is trying to do," said Bob Brzuszek, MSU landscape architecture professor, who has overseen the university's involvement with Chuo Li, associate professor and co-instructor of the Urban Design Studio class.

Brzuszek recently accepted the Isaiah J. Whitley Founder Mobile County Training School Legacy Award on behalf of the university for its involvement with building the Blueway. The award, given by the Africatown school's alumni association, is named for the principal who served from 1910 to 1923.

An opportunity to introduce students to the rigors of real-life design and problem solving in a service-learning environment was the motivation behind Brzuszek's and Li's initial involvement in the project, with the two also wanting students to honor the history and culture of Aftricatown.

Adding to the significance of creating design plans for the Blueway's points of interest and the community center's landscaping was that freed slaves who had been passengers aboard the Clotilda purchased Africatown and traveled the local waterways, using them for sustenance and recreation.

"This assignment has been good for students because it is an actual site with unique conditions and provides the human element of working with clients. It's not an academic, hypothetical project. It involves real problems in an area of historical and cultural significance," Brzuszek said.

Students met with Africatown representatives in community meetings and focus groups, visited the community and toured the site before forming three teams to work on different areas of the town's river access. The student plans had to meld into one seamless design.

The opportunity also provided students with hands-on experience in creating a sense of place, Brzuszek said.

"Sense of place communicates the historical and cultural significance of a location through landscape design. It also accounts for the issues and values within the culture," Brzuszek said. "The students had to dig deep in this project—they couldn't just apply a surface design. It had to come from the heart."

The students' conceptual plan did just that and has provided the community with a vision for what the area could look like. As a result, Africatown is now hosting a national design competition, with one of the MSU urban design students participating.

Landscape Architecture magazine, Design Alabama and National Park Service magazine have featured the students' work, while Brzuszek has continued to work with the community to see that some of the students' solutions are refined and implemented.

"It is an honor for our department and the university to be recognized by the community for this service-learning project," Brzuszek said. "For me, receiving the Legacy Award is one of the best awards because you're helping people. The Africatown community is a great group to be involved with because the people are proactively working to pay tribute to their heritage and culture."