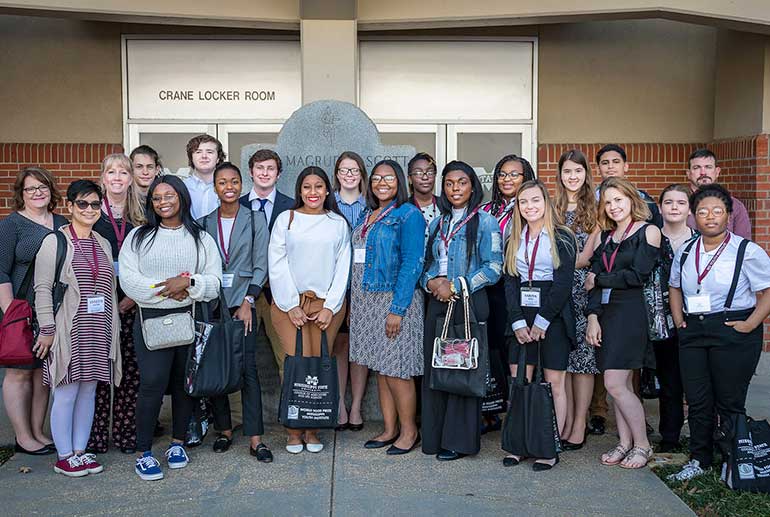 To be eligible, students researched and wrote an essay on one of 15 topics related to food security in a developing country and then presented a synopsis of their research at the event. As part of their project, each student suggested innovative ways to improve food security. The Borlaug Scholars program pays tribute to the World Food Prize's founder Norman E. Borlaug.

Macon native Jilkiah Bryant, a Mississippi School for Mathematics and Science senior returned for a second time to the annual event. Both years, her essays focused on infectious disease. Last year, she presented on infectious disease prevention among U.S. military in Afghanistan, while this year she researched the HIV epidemic in Eswatini, formerly Swaziland.

"I discuss ways to reduce the country's HIV rate and cultural barriers that may hinder implementation of certain educational and prevention programs," Bryant said, noting that the nation has one of the highest HIV infection rates in the world.

Bryant also founded a service organization in her community called Project Powerful that connects local teenagers with service opportunities, and she said her favorite aspect of the Mississippi Youth Institute is how it challenges students to think globally.

"This program helps students consider problems in places other than the United States even as we face our own challenges. That is what encouraged me to get more involved—when I realized it was looking at the bigger picture," she said.

Tina Gibson, a biology instructor at Mississippi School for Mathematics and Science and mentor to Bryant and two other 2019 Borlaug Scholars, said the event was a chance for students to grow as writers and researchers.

"This experience helped students become more aware of their writing skills, how to research a topic and come up with a solution to a problem, which was perhaps the hardest part of the assignment," she said. "It also gave them an outlet to research an area of interest that they may not otherwise get to speak on."

Gibson pointed out competitive research opportunities as a whole are important on the path to post-secondary education.

"Experiences like this competition allow students to take ownership and defend something they've developed on their own, plus the chance to travel and represent MSMS and the state of Mississippi, and the possibility to win scholarship or monetary prizes," she said.

Associate Dean Scott Willard, who was instrumental in bringing the Mississippi Youth Institute to MSU, said he's proud of the program's growth.

"We hope our institute brings the conversation of food insecurity into the classroom at a time when students are considering their future careers, and possibly be inspired to pursue a major or career aimed at stamping out hunger," he said. "We believe this program will become a hallmark outreach program for our college, and provide high school teachers and students with the inspiration to consider food insecurity and become part of the solution in fighting world hunger."

In addition to Bryant, other participating Borlaug Scholars and their presentation topics include (by hometown):

MONTICELLO—Sarina Dale of Lawrence County High School, improving access to education in the Republic of Burundi.

Top students from World Food Prize Mississippi Youth Institute will be invited to the Global Youth Institute in Iowa in October. Participating students also are eligible to apply to the Borlaug Ruan International Internship and the USDA Wallace-Carver Fellowship. Additionally, teachers can apply for professional development opportunities through the global guides program with the World Food Prize.

Anyone interested in the World Food Prize Mississippi Youth Institute, should contact Willard at swillard@cals.msstate.edu. For more information, visit www.worldfoodprize.org/en/youth_programs/global_youth_institute/mississippi.