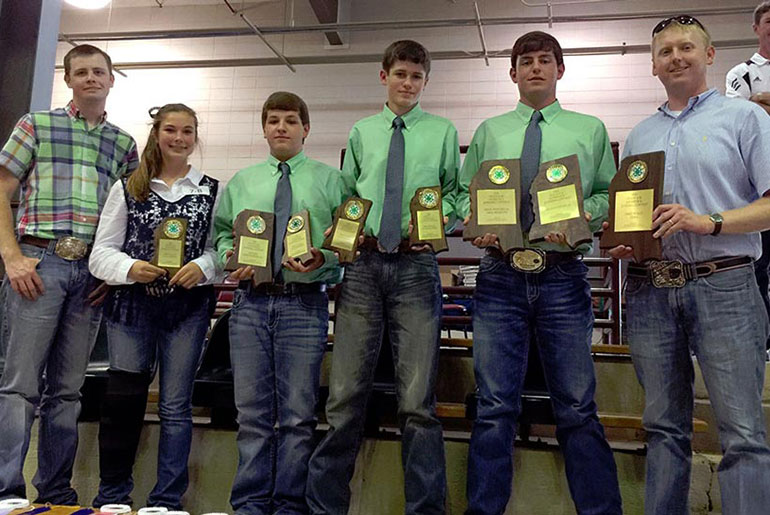 Tucker Wagner, far left, a graduate student in the Mississippi State University Department of Animal and Dairy Sciences, and Brett Crow, far right, an instructor in the department and coach of the MSU Livestock Judging Team, are pictured with the Lincoln County 4-H team at the statewide 4-H/FFA livestock judging contest. The event was held at the MSU Horse Park in Starkville, Mississippi, on May 21, 2016. Team members from left are Rylie Melancon, Walker Williams, Jacob Johnson and Will Watts.  (Photo by Submitted)

The three-day camp in the MSU College of Agriculture and Life Sciences is open to teams and individuals who are 14 to 18 years of age. Past attendees have included top winners in Mississippi, Alabama and Tennessee livestock judging competitions.

"The camp gives team members a chance to collaborate," said Brett Crow, the animal and dairy sciences instructor who oversees the camp. "During statewide competitions, the team score is made up of individual scores, so teammates are out there on their own trying to make the best decisions in a fast-paced, intense environment."

Crow said the camp covers a lot of ground over the three days.

"We show teams and individuals how to judge beef cattle, sheep, meat goats and hogs. We also help them prepare for oral reasoning. They rank a class of four animals from best to worst. After that, they must defend the reasons for their decision. The public speaking component can be the toughest part for a lot of the kids to go through," he said.

The statewide 4-H/FFA livestock judging contest for Mississippi was held in Starkville this year. It hosted 150 teens from across the state.

"Winning teams and high individuals in the junior and senior divisions of both the Mississippi 4-H and FFA contests attended our camp this year," Crow said.

"I started judging livestock at age 9. I have attended the MSU Livestock Judging Camp since Brett Crow started it in 2013," he said. "It helps improve the team and gives us all a chance to work together before the statewide competition. It's almost like a simulated contest."

In addition to the three-day livestock judging camp, MSU hosted a single-day camp for attendees ages 9 to 13. The two camps combined attracted more than 100 young people this year. Members of the MSU collegiate livestock judging team serve as camp instructors.

The junior and senior Lincoln County 4-H livestock judging teams placed first at the Mississippi 4-H contest. They will compete in the National Livestock Judging Contest in Denver, Colorado.

The junior and senior Kossuth FFA livestock judging teams placed first in the Mississippi FFA contest. They will compete at the National FFA Convention in Indianapolis, Indiana.

The senior J.B. Pennington livestock judging team placed first in the Alabama FFA contest. It will compete at the National FFA Convention in Indianapolis, Indiana.

The senior Lauderdale County 4-H team placed first in the Alabama 4-H contest. It will compete at the National 4-H Livestock Judging Contest in Louisville, Kentucky.

Both camps and the collegiate team are sponsored by the MSU College of Agriculture and Life Sciences Department of Animal and Dairy Sciences.