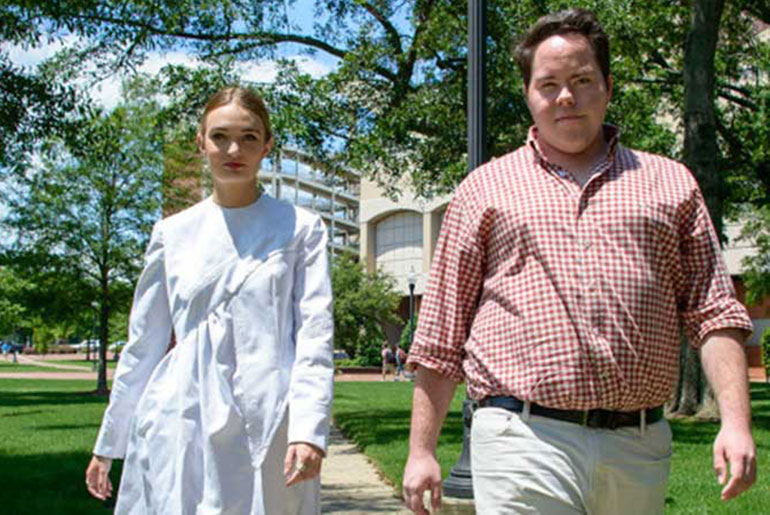 Savannah Dalgo of Ocean Springs models the award-winning silver and white outfit piece designed by Jesse Newton of Eupora. Both are senior fashion design and merchandising majors at MSU. (Photo by David Ammon)

A Mississippi State rising senior from Eupora is the first-place winner in the 2016 New Orleans Fashion Week student designer competition.

Jesse D. Newton, a fashion design and merchandising major in the university's School of Human Sciences, had entered a silver and white outfit pairing an asymmetrical jacket and skinny-leg pants.

Taking place recently at the New Orleans Board of Trade on Magazine Street, the sixth-annual event showcased talents and collections of established and emerging fashion designers, brand houses, boutiques, retailers, models, and hair and makeup artists in a series of runway shows, fashion events and exhibitions.

Newton, an MSU President's List Scholar, said his winning entry originally was for a class taught by visiting professor Catherine Black in which members were required to create a miniature collection over the semester.

"I love anything with bright colors and bold patterns," Newton said. "The piece I competed with was a statement piece; it had quilting elements of a motorcycle jacket, a jewel neck, and darts contoured into the seams."

Newton said he often jokes "that my favorite color is glitter" because "I really am inspired by the 1950s and 60s; not necessarily the vintage feeling, but the preppy, pretty housewife."

"I love taking that silhouette and turning it into something new and different," he explained.

Newton already was scheduled to be in the Crescent City since Rachel Woodward, an MSU alumna and featured designer at the event, earlier had invited him to be her assistant. Since he was planning to attend, Newton decided to enter a piece of his own in competition.

He said the challenge involved "mostly college students with a few high schoolers as well." A career information program also was part of the activities, he added.

As an upper-class major, Newton had many earlier opportunities to work with fashion industry professionals. Seattle, New York, Atlanta and North Carolina, as well as locations in Italy, are among venues his class has visited over the years.

Charles Freeman, an assistant professor in human sciences, said that it is important for MSU majors to learn from and connect with fashion industry professionals.

"Because of our location here in Mississippi, it can be difficult for our students to connect with industry professionals," Freeman said. "So, we try to offer these trips either through the National Retail Federation or as part of their studies. We also do our best to offer scholarships for students who can't afford the trips otherwise."

He also proudly noted that MSU's fashion design and merchandising academic program has a 93 percent job placement rate for graduates, with many going into technical design positions. Creative design positions and executive management positions also are common, he said.

After graduation, Newton said he is considering the field of pattern making in which design templates are created for tracing onto garment cloth that will be cut and assembled.

"It's something I would enjoy; it pays well and it is needed in the industry," he said. "Within pattern making, there are people who pattern by hand or with computer software. Those programs can be difficult to learn, so that's something I am working on now."

Newton admitted that choosing fashion design wasn't an easy decision for him or his parents. While his parents worried about career opportunities, his concern was much more basic—he didn't know how to sew.

"I learned to sew a month before I came to school because I was afraid I would get here and everyone would be so far in front of me," he recalled. It all worked out because MSU instructors actually prefer "to teach us the professional way to do things, so coming in without a lot of background meant I didn't have to break habits when I arrived," he said.

Freeman said Newton's level of experience is exactly what he and other faculty colleagues want each student's to be. He additionally praised the "go-getter attitude" the young Webster Countian consistently has displayed while on campus.

"I really think Jesse is quite unique in his aesthetic, his work ethic and his willingness to try new things," the Louisiana State University doctoral graduate said. "Often, the best designers are not those who are most creative, but those who are willing to work the hardest. Jesse does a great job at taking in what is around him and transforming that into fabulous design."

In addition to Newton's studies in the College of Agriculture and Life Sciences curriculum, he also must devote a considerable amount of time and concentration to his non-classroom duty as a drum major for MSU's Famous Maroon Band.

For more about the fashion design and merchandising major and others in MSU's School of Human Sciences, visit www.humansci.msstate.edu.