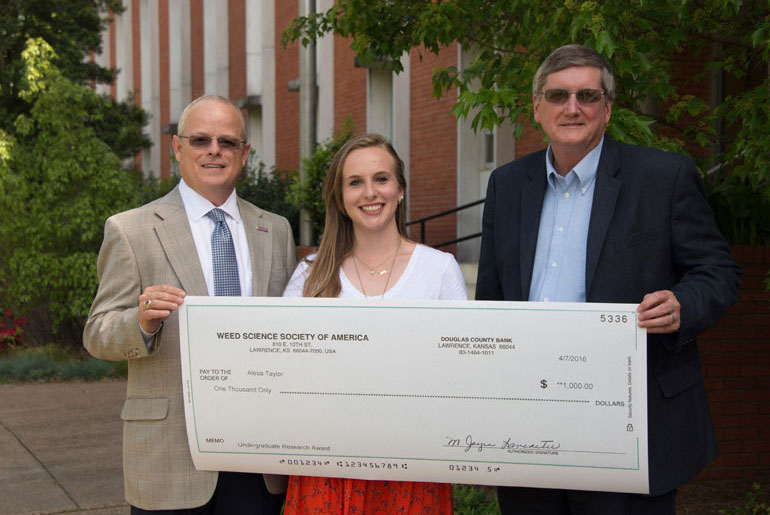 Alesa Taylor receives a check from the Weed Science Society of America and is pictured with Will Evans, head of MSU's Department of Food Science, Nutrition and Health Promotion, and Mike Phillips, head of the Department of Plant and Soil Sciences. Taylor is working on undergraduate research under the direction of John Byrd, plant and soil sciences professor, and Sylvia Byrd, food science, nutrition and health promotion professor.  (Photo by Karen Brasher)

All are affiliated with the weed science program of the university's plant and soil sciences department. Regarded as the nation's premier weed science meeting and held in Puerto Rico, the competition was part of a major event during the 56th Annual Meeting of the Weed Science Society of America and the 69th Annual Meeting of the Southern Weed Science Society.

Scott Willard, associate dean and professor in the College of Agriculture and Life Sciences, said the awards serve as a testament to the training MSU students receive and to the faculty's expertise.

"While this recognition demonstrates the quality of research being conducted at MSU, it also shows these students have a good command of the soft skills required to get ahead academically and professionally—skills like writing, speaking and presenting. It not only showcases these students as up-and-comers in a particular field, it demonstrates that each of them is well-rounded and has the skillset required to communicate their individual expertise," Willard said.