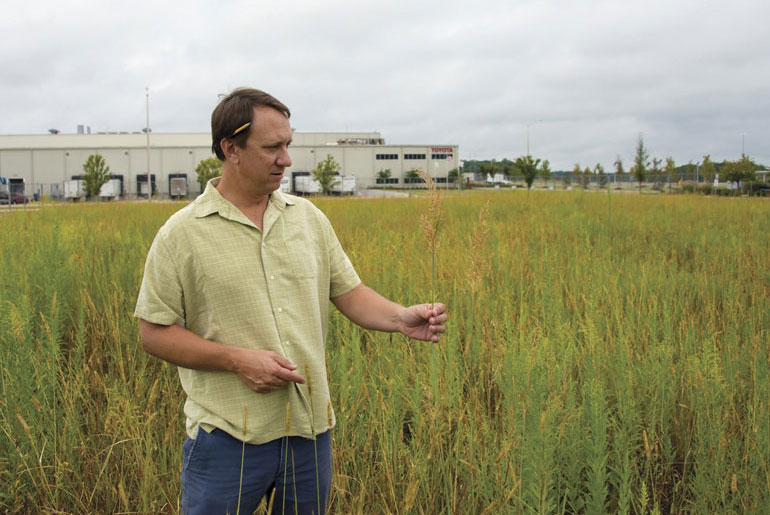 Tim Schauwecker, an MSU landscape architecture associate professor recently named 2016 Outstanding Educator of the Year, examines the grasses and native plants in the Toyota meadows where he provided assistance with landscape ecology.  (Photo by David Ammon)

The National Association of Landscape Professionals Academic Excellence Foundation has named a Mississippi State landscape architecture associate professor as the 2016 Outstanding Educator of the Year.

The Educator of the Year Award recipient, nominated by a peer, is an individual whose passion, dedication, and hard work have contributed significantly to education in the landscape industry.

"Dr. Schauwecker is an excellent educator, coordinating the landscape contract and management major in the College of Agriculture and Life Sciences' Department of Landscape Architecture and working with industry to develop sustainable ecosystems," said George M. Hopper, dean and director.

Schauwecker's drive to share knowledge of landscape ecology extends well beyond the classroom. As a scientist in the Mississippi Agricultural and Forestry Experiment Station, Schauwecker recently helped one of the largest global automotive manufacturers take steps to benefit the environment. His work at Toyota Motor Manufacturing Mississippi helped create a meadow for pollinators.

When the plant was built, five acres on the north side were used for parking. When the parking lots were no longer needed, the gravel was removed and team members added top soil and planted wildflower seeds. The original seeding mix did not perform as well as expected, so Toyota turned to Schauwecker, a prairie ecosystem expert and landscape ecologist, for advice. Schauwecker went to work on the pollinator gardens.

"The site at Blue Springs is not a prairie in the truest sense but many of the conservation efforts simulate a prairie environment," Schauwecker said. "We looked at why some of the species in the original seed mix were not doing well and how we could assist Toyota in their pollinator project."

The first step for Schauwecker was a soil sample and an inventory of the existing plants which germinated from the commercial wildflower mix seeded in the winter of 2012–2013. The species in the mix that were less successful were primarily adapted to climates and soils in other regions. Three areas were specified for the pollinator gardens. Toyota also was mowing the areas a few times per growing season, which did not bode well for the native plants.

"The initial prescription for the pollinator gardens was to stop mowing and use prescribed fire to stimulate the growth of native plants and grasses," Schauwecker said. "This saved Toyota labor costs and also provided a training opportunity for the company which employs a fire department/safety crew."

The first garden is approximately one acre and is the most visible and smallest of the three areas. The second garden is 1.55 acres and lies between two large parking areas. The third and largest garden is about 3.1 acres. It lies adjacent to one parking lot but is bound on its other three sides by a perimeter road. This garden is divided into several treatment areas which allows access to the public and plant employees to view how the different management prescriptions are working in the field. A pollinator conservation mix was used to reseed the gardens in early 2015.

The plants' efforts have not gone unnoticed. In 2014, the Blue Springs plant was certified as a Wildlife at Work site, a designation given by the Wildlife Habitat Council. Deemed the model sustainable assembly plant for North American operations, the pollinator gardens along with two other projects support the Wildlife at Work certification.