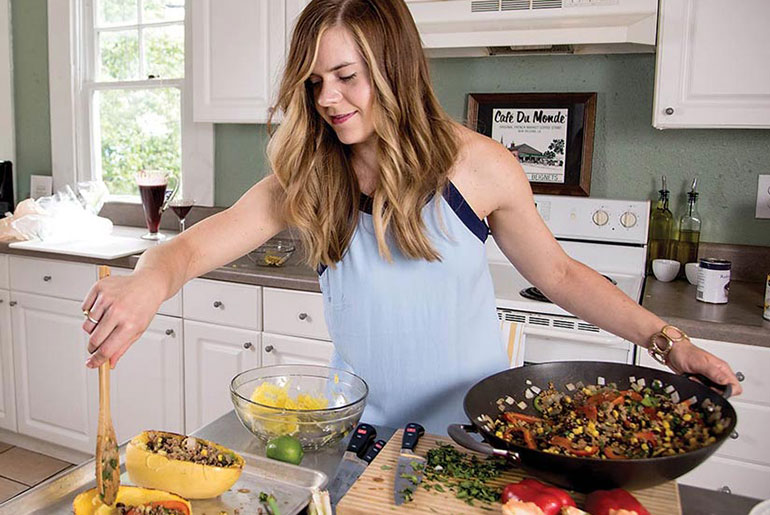 Katie Strickland prepares burrito-style spaghetti squash. She loves coming up with fresh takes on healthy food for her Katie’s Plates menus, she said.

Strickland's goal is her own show on the Food Network. She also wouldn't mind owning a restaurant—maybe two.

"I'd like to have one restaurant with healthy food and another where I can go all out with no limitations," she said.

Those may be lofty ambitions. But Strickland already owns her own thriving food business. And she's only 24-years-old.

With Katie's Plates, the MSU Food Science, Nutrition, and Health Promotion 2013 graduate offers healthy, home-cooked meals delivered in a range that includes much of the Over the Mountain area, located just north of Birmingham. Prospective customers can visit her website and sign up to have lunches and dinners brought to their homes Monday through Friday. Her company has grown since she started it, mostly for family and friends in the beginning, in January 2014, she said.

"In November 2014, I had to quit my job at Iron Tribe and take on my business fulltime," she said. "I just jumped into it. I feel very lucky."

She's also hired a driver to help her with deliveries, she said.

Strickland grew up in Homewood and attended Homewood High School until her sophomore year, she said. Her family moved to the Oak Mountain area to have room for horses. She did English eventing competitions and still has two horses, she said.

Her AP English teacher at Oak Mountain High School was a Mississippi State University graduate, Strickland said, and invited students for a visit to the Starkville campus.

"I told my friend, 'There's no way I'm going to college in Mississippi,' and she said, 'At least you'll get a day out of classes,'" Strickland said. "I ended up falling in love with Mississippi State." She originally intended to become a dietitian, she said.

"But Mississippi State is so focused on food service, and I took a class called Quantity and Quality in Food Production, which was about cooking for large groups," she said.

The class led to a discovery of a passion for cooking and food science, she said.

During her summers as a college student, Strickland worked as a nanny and personal assistant for Amanda LeBlanc, a Birmingham-based professional organizer who starred in her own television show, "The Amandas."

"I'd cook dinner, and we'd do grocery shopping together," Strickland said. "Amanda said to me, 'Katie, what if you started some kind of meal service?'"

Operating on the belief that many families want to eat healthy but just don't have time to do so, Strickland started Katie's Plates.

"You can get meals for singles, which kind of sets me apart, for couples, or for families—three to five servings or six to nine servings," Strickland said. "I do lunches, dinners, snacks and drinks. I also have a weekly dessert and a breakfast, usually a quiche."

Healthy eating doesn't mean boring eating to Strickland. She loves tweaking recipes and making them full of flavor as well as nutritious, she said.

"I don’t cook just plain old chicken breasts with broccoli," she said. "I do things like a chicken parmesan that's breaded with almond flour and served over spaghetti squash."

"I love to get emails from customers saying things like 'My kids loved the spaghetti squash,'" she said.

Strickland's success hasn't come without demands. She works almost every day, she said, beginning to cook at noon. Her work isn't over until at night after deliveries are made.

In addition to her own business, she writes paleo breakfast and lunch menus for eMeals.

"That gets my creative juices flowing," she said.

She's working toward a storefront, too, she said.

"There are days when I think, I'm not going to be able to get all this food out," Strickland said. "But I do. And I love what I'm doing."