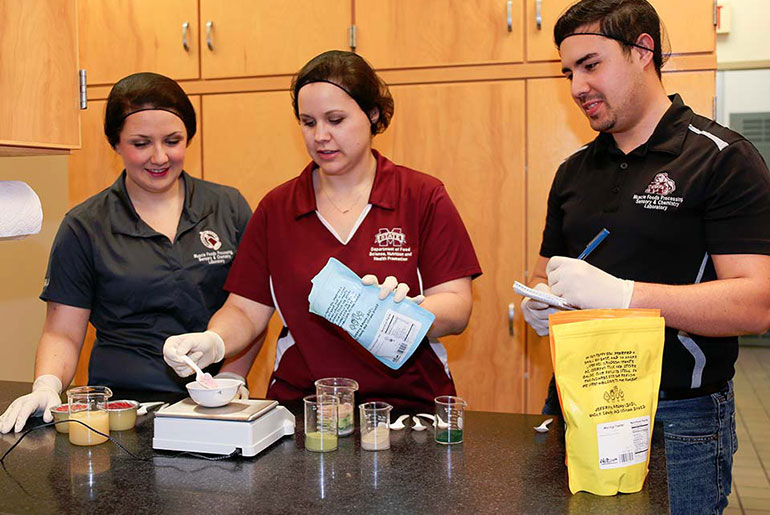 A Mississippi State University student team's business venture may be one solution to nutritional deficiencies the state’s schoolchildren face.

The team of students in MSU Department of Food Science, Nutrition and Health Promotion proposed a business to produce a cost-effective, sweet-potato-based powder they have named "Panacea."

Panacea would be produced using culled sweet potatoes, mixed with other ingredients such as applesauce or yogurt, and sold to cafeterias to increase the nutritional value of school lunches.

"If you've ever gone to any school cafeteria, one of the first things you're going to see in the trash can is fruits and vegetables," Von Staden said. "There is a large need for an effective way to get children to eat fruits and vegetables instead of throwing them away."

Developing a product to achieve that goal is an example of social business, a model developed by Bangladeshi entrepreneur Muhammad Yanus, which focuses on sustainable businesses that address social health issues instead of maximum profit.

Representing the MSU College of Agriculture and Life Sciences, the student team was one of 11 groups from Mississippi public universities that participated in the Blue Cross & Blue Shield of Mississippi Social Business Challenge last month. The event allowed students to showcase possible solutions for obesity and other health issues.

The team is currently discussing options for distributing the product with food companies. They propose eventually making Panacea available in stores, which could extend its reach into homes.

"In an age when parents are working more hours than ever, it seems like we're trading freshness for convenience, not because we want to but because we're accustomed to it, and it is a necessity in most households," Portillo said. "When we repeat this trend, we fall into a complacency that is consciously teaching our youth that this is the norm. Those habits have traveled from homes to cafeterias. Children need a healthy but nonconventional option that offers the benefits of eating the greens without the dread of doing so."

Under the team's plan, Panacea would contain mostly Mississippi products. It would be a boon to state sweet potato farmers because it makes use of crops considered to be unmarketable. About 30 percent of the state's harvested sweet potatoes do not meet size, shape, color or appearance standards that consumers expect. However, these culled tubers still have the same nutritional value as perfect potatoes.

Portillo said the product they designed is intended to be mixed with applesauce because that is a suitable food item regularly found in many school cafeterias.

"How this product differs is that you're going to have applesauce that includes spinach, kale, sweet potatoes, and various other fruits and vegetables that kids would otherwise think they don't like," he said. "When they find out those items are in the applesauce, they'll have fewer inhibitions about trying other products. Along with getting health benefits, it would instill confidence in the kids and allow them to make better health choices outside school lunches."

Ivey said a major consideration of the proposed product was making sure it met nutritional standards of the Fresh Fruit and Vegetable Program (FFVP), a federally assisted program that helps feed students in participating elementary schools. After operating as a pilot program in a limited number of schools for six years, FFVP was established through the Food, Conservation and Energy Act of 2008. Under the program, schools receive $50 to $75 per student for each school year.

"There are similar products to Panacea already on the market, but none would be able to compare to the estimated price of 28 cents per serving," Ivey said. "While the product would cost slightly more than the amount the Fresh Fruit and Vegetables Program offers to schools, we feel any extra would be well spent when more students achieve their daily nutritional goals."

"We developed a revenue model with a low retail price but a high profit for producers that would turn into a projected $1.2 million when 25 million servings are placed in school lunches across Mississippi over just one year," she said.

David Buys, faculty advisor for the team and assistant extension/research professor, said the product represents an important shift toward a profit-generating, health-promoting product that can contribute to the improved nutritional well-being of children and adolescents in the state.

"Mississippi has seen a lot of nonprofit-based programs that seek to affect change in the health and economic status of our people, and for that, I am grateful," Buys said. "We cannot work our way out of poverty and poor health in Mississippi solely with good intentions; rather, we have to find sustainable, revenue-generating solutions to these complex problems like the ones these students propose."

Team members initially developed the idea for the Panacea project at the Mississippi Sweet Potato Innovation Challenge, and they partnered with the MSU Entrepreneurship Center for business assistance.

"The MSU Entrepreneurship Center is based in business but supports anyone on campus who wants to turn an innovative idea into a company," Buys said. "It was important to partner with them to help this business idea become a reality."