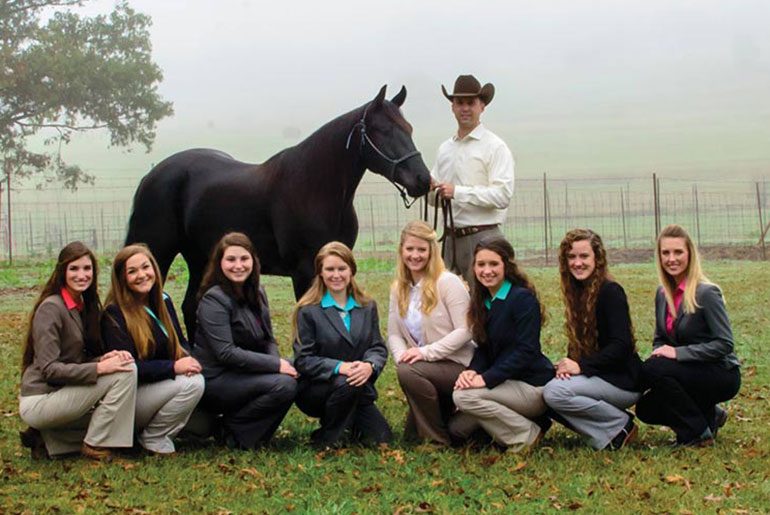 Mississippi State's new Horse judging team broke out of the starting gate at a gallop. Formed and coached by Dr. Clay Cavinder, associate professor in Animal and Dairy Sciences, the team was named Reserve Grand Champion at the All American Quarter Horse Congress in Columbus, Ohio, the largest horse show in the world.

Horse judging is the process of assessing the appearance and performance of a horse in comparison to the breed standard. The ability to judge an animal's conformation and movement is an important skill to have in the horse world.

"How an animal is built dictates its performance. We call it form to function. Being able to look at a horse and logically analyze how it is put together helps you know what discipline the animal is suited for. The ideal cutting horse is built very differently than the ideal show jumping horse," Cavinder explained.

Horse judging has existed as an individually recognized sport—apart from livestock judging in general—since the 1960s. However, MSU's horse judging team has been dormant for many years.

While the team might be new to the arena, they take competition seriously.

"I have a motto I live by," Cavinder said. "It is not important that we win. It is imperative that we prepare to win."

Perhaps because of this motto, Cavinder wasn't surprised by their early success.

"The students took that to heart; they took initiative and practiced. Leading up to Congress, people would ask how I thought the team was going to do and I told them—we're good. The students made the decision to know their stuff and that paid off," Cavinder said.

Determination and drive are what has defined this team from the very beginning.

"Our department needed something competitive to get involved with, and so this team attracted the best of the best. Their intelligence combined with their desire to be involved led to success. Now we just have to keep it up," Cavinder said.

The typical horse judging competition consists of students ranking four horses, and then orally defending their decisions to an expert in a session called Reason. This practice not only teaches students how to assess horses for physical and performance faults, but it teaches them to justify their decisions through effective communication—a skill that many of the team members feel has impacted every facet of their life.

"I tell the girls that horse judging is 90 percent life-skill development and 10 percent horses. We emphasize how to communicate confidently, but with respect for those you interact with."

In an interview posted on their Facebook page, junior Animal and Dairy Science major, Samantha Miller stated, "Being a member of the team has impacted me as a person. I've gained exponential amounts of confidence. And I've learned to bridge the gap between mind and mouth, as Dr. Cavinder would say. I find it easier to speak to people, so I’m a lot more outgoing, and a lot happier."