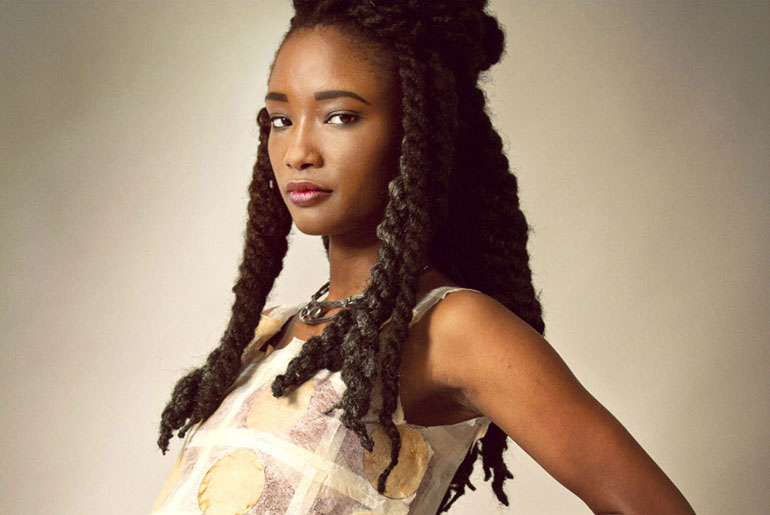 Taylor M. Howell of Fayette is a fashion design and merchandising major in the School of Human Sciences of the university’s College of Agriculture and Life Sciences.

Her entry took Best of Show honors in the undergraduate division of the recent 2015 Apparel, Textiles and Design Community Juried Showcase and Exhibition.

The competition was part of the Virginia-based American Association of Family and Consumer Sciences’ 106th annual conference. Some 700 professionals, educators, students and others took part in the Jacksonville, Florida, gathering.

Miller, a veteran faculty member in the School of Human Sciences, said Taylor’s entry was a two-piece set with a cropped top and a circular skirt made from upcycled coffee filters, dryer sheets and teabags. The unconventional creation debuted during last year’s MSU Trashion Show that featured clothes constructed from recycled material, she explained.

An MSU President’s List Scholar, Howell said, “This was the first project I saw through from design to completion. The concept was very different, so I wasn’t expecting to win.

“Placing first encouraged me in my work,” she continued. “It was a big honor to see my ideas recognized as good for the future.”

Miller commended Howell’s dedication to the creative process. “Taylor is a wonderful example of a student who really pushed herself and embraced the process instead of cutting corners,” she said.

Miller said Howell’s most recent accolade “further demonstrates the integrity and excellence of our program.” Additionally, she noted that another Howell creation had won first-place honors in the garment manufacturing category of the 2014 Cotton Incorporated Fashion Show held on campus.

Senior Brittany L. Dowell of Vicksburg also was entered in the 2015 AAFCS competition. She and Howell became the first duo from Mississippi State ever to compete at the same event, Miller said.