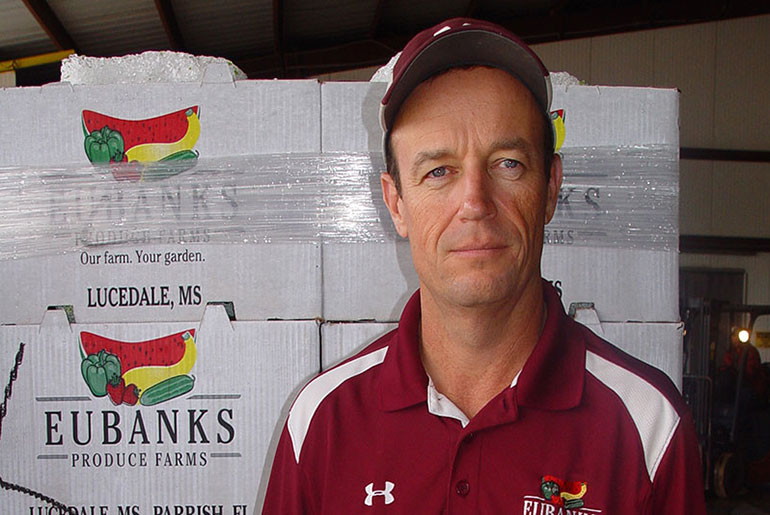 He has been buying land throughout his career and his farm is now one of the largest vegetable farms in Mississippi. Eubanks Produce encompasses about 2,800 acres. He farms in six counties, including in nearby Alabama.

As a result of his vegetable farming success, Eubanks has been selected as the 2015 Mississippi winner of the Swisher Sweets/Sunbelt Expo Southeastern Farmer of the Year award. Eubanks joins nine other state winners from the Southeast as finalists for the award. The overall winner will be announced on Tuesday, Oct. 20 at the Sunbelt Ag Expo farm show in Moultrie, Ga.

He relies on about 300 H-2A foreign guest workers for harvesting his crops. The time for profitable harvesting is short for each crop, so a reliable, legal workforce is a high priority for Eubanks.

He also plants into plastic mulch. He often uses black plastic for spring crops and paints the black plastic white for the fall season.

Eubanks samples plant tissue to pinpoint nutrient needs. He also samples his soil for nutrients twice yearly. He analyzes his well water once per year. He conducts pesticide residue tests on each crop at least once per season. “All produce can be traced to the production field, the harvester and harvest time,” he says.

Facilities on the farm include coolers and air conditioning to keep the crops chilled and quality high before they are shipped out to customers.

Eubanks is different from most large growers in that he markets his crops himself rather than relying on industry brokers. "I do have one individual who helps me with sales," adds Eubanks. He ships much of the produce in returnable plastic containers.

"We have also used our watermelon shed to serve a Farm-To-Table dinner for our community," says Eubanks. "We planned the menu based on what we grew on the farm, and raised $3,000 to benefit St. Jude’s Children's Hospital." Local culinary students did the cooking and FFA students served the meal.

"We're also involved in the Farm to School program," says Eubanks. This program furnishes fresh local produce for school meals. "We try to appeal to a diverse customer base in a variety of ways to encourage consumption of fresh and healthy produce," adds Eubanks.

"I was born into farming," says Eubanks. One of his first jobs was making sure the truck carrying soybean seed stayed up with the planter. His dad paid him with a four-acre block of soybeans. He grew watermelons as a teenager. After graduating from Mississippi State University, he returned to the farm and began the transition from agronomic crops to vegetables. He still grows soybeans, mainly as a rotation crop.

His wife Janice has a background in computer science and business. She oversees accounting and manages the farm's office. She introduced hand-held computers for use in the fields to keep track of the piece-rate harvests. This helped reduce payroll-processing times. She also helped the farm install a wireless network so U-Pik customers can make credit card purchases.

"Janice makes sure we comply with the Produce Traceability Initiative (PTI), and Good Agricultural Practices (GAP)," adds Allen. Janice is a member of the Ivy League Garden Club, and the board of United Way for Jackson & George Counties. She is a George County 4-H volunteer. She is also a Mississippi real estate agent.

Allen and Janice are active in Watermark Congregational Methodist Church. The Eubanks are also hosting a Chinese exchange student.

They have four children, sons Andrew, Joshua and Jacob, and daughter Allison. Their older children Andrew and Allison enjoy working on the U-Pik farm. Andrew seems interested in agricultural engineering, according to Janice. Allison uses social media to promote the farm. She also has taken an interest in the Farm Fresh Gourmet business. Its Allison’s Own brand is named after her.

"We want to give our children the opportunity to come back to the farm if they are interested in doing so," says Allen.

The entire family stays in shape by running in long distance races. "It all ties in with our healthy crops, eating healthy meals and staying active," says Janice.

Steve Martin, Mississippi Extension interim associate director for agriculture and natural resources, is state coordinator of the Farmer of the Year award.

Eubanks was nominated for the honor by Patricia Knight from Mississippi State University's Coastal Research and Extension Center in Biloxi. Knight is impressed that Extension agents from different counties recommended Eubanks for the award.

As the Mississippi state winner of the Swisher Sweets/Sunbelt Expo award, Eubanks will now receive a $2,500 cash award and an expense paid trip to the Sunbelt Expo from Swisher International of Jacksonville, Fla., a $500 gift certificate from the Southern States cooperative, the choice of either $1,000 in cottonseed or a $500 donation to a designated charity from PhytoGen, and a Columbia vest from Ivey's Outdoor and Farm Supply.

He is now eligible for the $15,000 cash award that will go to the overall winner. Other prizes for the overall winner include the use of a Massey Ferguson tractor for a year from Massey Ferguson North America, another $500 gift certificate from Southern States, the choice of another $1,000 in cottonseed or a second $500 donation to a designated charity from PhytoGen, and a Columbia jacket from Ivey's Outdoor and Farm Supply.

Swisher International, through its Swisher Sweets cigar brand, and the Sunbelt Expo are sponsoring the Southeastern Farmer of the Year awards for the 26th consecutive year. Swisher has contributed more than $1 million in cash awards and other honors to southeastern farmers since the award was initiated in 1990.

Mississippi has had three overall winners, Kenneth Hood of Gunnison in 1993, Ed Hester of Benoit in 1995 and Willard Jack of Belzoni in 2001.

A distinguished panel of judges will visit the Eubanks farm, along with the farms of the other nine state finalists, during the week of Aug. 10-14. The judges for this year include John Woodruff, retired University of Georgia Extension agronomist from Tifton, Ga., who specialized in soybeans for many years; Clark Garland, longtime University of Tennessee Extension ag economist from Maryville, Tenn.; and farmer Thomas Porter, Jr., of Concord, N.C., the overall winner in 2011.