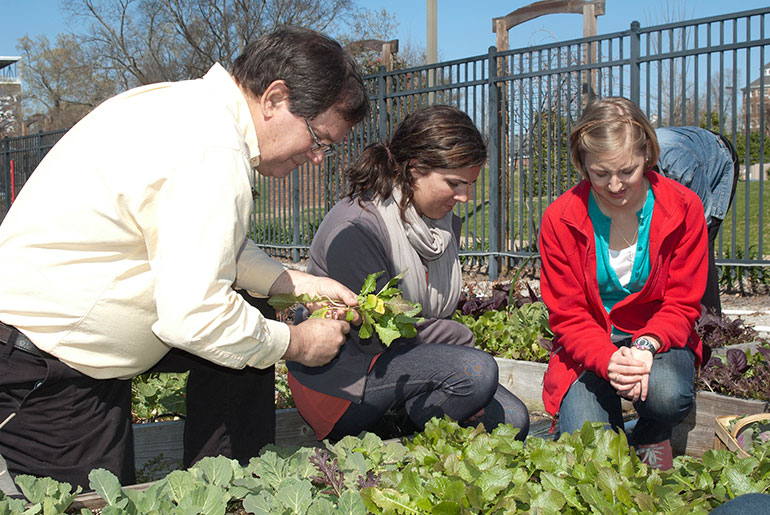 Six planters at the entrance of a Mississippi State University building are among Sylvia Byrd's efforts to take students who have never grown anything before and turn them into savvy consumers who have a better appreciation of where their food comes from.

Planters are frequently used outside homes and businesses to bring some color and life to otherwise sterile landscapes. Byrd, a professor of nutrition in the MSU Department of Food Science, Nutrition and Health Promotion, is working with David Nagel, vegetable and home garden specialist with the MSU Extension Service, to combine beauty with food production and grassroots awareness.

"Our goal is to create awareness of how easy it is to garden and to let students experiment with different fruits and vegetables," Byrd said.

The planters allow everyone who passes by to see foods being grown in the landscape, rather than being displayed on a grocery store shelf. In December, the planters outside MSU's Herzer Building were growing four kinds of colorful Swiss chard, mustard, onions and strawberries. Before that, they grew broccoli, cabbage and some greens. Last summer, the planters featured okra, tomatoes, cucumbers, watermelons and peppers.

"Okra is a member of the hibiscus family and has beautiful flowers," Nagel said. "In fact, I think the flowers of the okra are as pretty as any hibiscus. Chard used to only come as green leaves with white midribs and petioles. Now, it comes in red, orange, pink and yellow."

Nagel said red mustard is a vegetable that starts red but turns green when cooked. Certain strawberry varieties have flowers that are larger than normal but still produce fruit.

"There is a revolution in the vegetable world," Nagel said. "We're no longer growing plants just to eat, but we're growing plants that are attractive to look at, too."

Nagel plans the rotation of plants in the containers, plants them, and maintains them as they grow.

"One of the things we're doing with the containers is showing folks that you can grow something 12 months out of the year in Mississippi," Nagel said.

Planters have been placed strategically at the main entrances to the classroom building so students see them often, Byrd said. Tailgaters, who come to campus during football season, also enjoy the planters overflowing with beauty and produce.

"When the containers were really beautiful last summer, there were plants draping over the edges, and they provided a great source of nutrition," Byrd said. "Students would ask about them, and our students and staff would pick and eat the fruits and vegetables."

Anna Laurin Harrison of Ocean Springs is a May 2015 graduate of the Department of Food Science, Nutrition and Health Promotion and past president of the student dietetic association. Harrison pointed out that not every building has vegetables growing outside its doors, which makes the Herzer planters particularly striking.

"Students pass by those planters every day on their walks to and from class," she said. "We hope with future signage, students will be encouraged to stop, study and pick. We also want students to become interested in food production for themselves."

Harrison said she recognizes the disconnect in modern American culture between finished food products and the sources that generated those products.

"Most of the time, we even bypass the process of cooking, which leaves a huge gap between us and what we're eating," she said. "This has many implications, especially for the health of this generation and future generations."

"It's no secret that obesity and diet-related chronic diseases are rampant in the United States," Harrison added. "As the gap between us and our food grows, so do our waistlines. We have strayed from eating whole foods, like those grown in the planters, to fast food from the drive-through."

Harrison wants other students to know that health benefits are not the only reasons to eat fruits and vegetables. Growing them is a cost-effective way for individuals to supplement their diets with fresh produce. These planters are part of an effort to raise awareness of small-scale food production.

"We are a rural state, but most of our people live in towns and cities," Nagel said. "They see farms, but all they know is what they can see while driving by at 70 miles per hour."

In addition to overseeing the planters, Nagel teaches a vegetable production class. Agricultural information science majors typically make up the majority of this class, along with other several other majors in the College of Agriculture and Life Sciences who take the course as an elective.

"I have each student take a 2-foot-by-2-foot section of garden bed and grow something," he said. "Every year, this will be the first time some of my students have ever grown something."

Harrison said she believes that when people are not afraid to grow, harvest, prepare and cook their own food from planters like these, there will be a lifetime improvement in the overall nutritional quality of diets.

"By increasing awareness of food production, we are shortening the chain between people and what they eat," she said. "This, we believe, will improve not only eating habits, but quality of life."

Byrd said raising awareness of where vegetables come from, introducing new vegetables into diets, and showing that they can be easy to grow is only part of the faculty's overall efforts.

"Our goal is to start small and grow future foodies," she said. "We have mothers and grandmothers who do not cook, so it's not surprising we have students who don't know how fruits and vegetables are grown."

"They need to have an in-depth understanding of food and where it comes from so they can talk with potential employers and interact with clients in their future positions," she said.