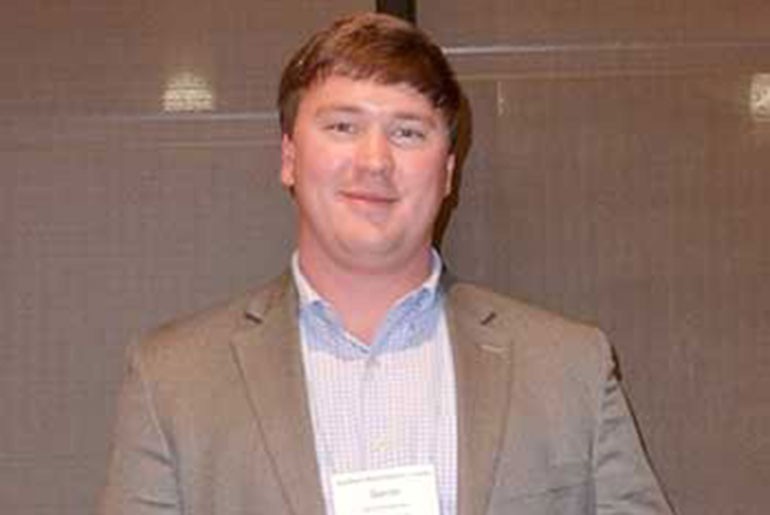 Garrett Montgomery and Andrew Denton were honored at the Southern Weed Science Society of America's annual meeting in Savannah, Georgia, in January.

Montgomery graduated from MSU in December with a master's degree in weed science. He presented data generated from his master's research. He recently became a doctoral student at the University of Tennessee.

Jason Bond, associate extension and research professor at the Delta Research and Extension Center in Stoneville, was Montgomery's adviser at MSU.

"Garrett was a tremendous asset to our program in Stoneville," Bond said. "He joined us in the spring of 2012. He graduated on a Friday and showed up to work with us the following Monday. He's a first-rate student and researcher."

MSU is duplicating some of the research Montgomery is conducting in Tennessee. During his time at Mississippi State, his research on rice and a specific herbicide, helped contributed to a herbicide getting federal approval for use on rice.

Denton, who is pursuing a master's degree in agronomy, placed second in the master's student visual display contest for his poster titled, "Sequential Applications for Rescue Control of Glyphosate-Resistant Palmer Amaranth."

Denton is under the direction of Darrin Dodds, associate extension and research professor in the Department of Plant and Soil Sciences.

"Andrew is an exceptional student who has been the recipient of several awards this year," Dodds said. "It's great to see his hard work recognized."

For more on the Southern Weed Science Society, see swss.ws.

Information about Mississippi State's plant and soil sciences department is found at pss.msstate.edu.