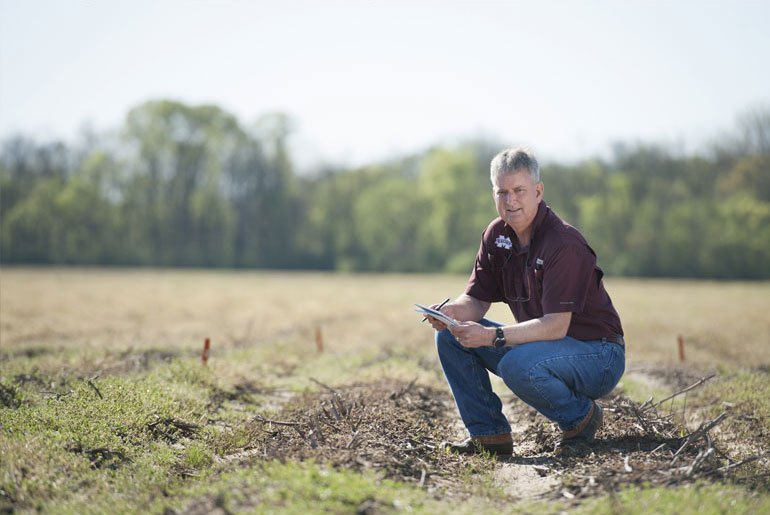 An award-winning Mississippi State weed science professor is receiving another high honor, this time in the university's College of Agriculture and Life Sciences.

Dan Reynolds has been selected to hold the Edgar E. and Winifred B. Hartwig Endowed Chair in Soybean Agronomy.

In 2012, Reynolds was named scientist of the year by the Southern Weed Science Society of America. He is a doctoral graduate in crop science from Oklahoma State University, with bachelor's and master's degrees completed at the University of Arkansas.

In 2007, an initial contribution by Winifred Hartwig established the endowment. The Mississippi Soybean Promotion Board joined in 2013 with the Missouri-based Monsanto Co. and Switzerland's Syngenta agrochemical company to provide full funding.

"Dr. Reynolds has a vast knowledge of soybean production systems, specifically when it comes to weed control and agronomy," said Mike Phillips, head of MSU's plant and soil sciences department.

Speaking for colleagues in the department and college, Phillips said it is "an honor to have an individual with such expertise in this position; someone who can provide leadership to the soybean industry in Mississippi and beyond."

Reynolds, a cropping systems researcher with the Mississippi Agricultural and Forestry Experiment Station, will focus primarily on weed science and agronomy in his research.

Edgar Hartwig had a 47-year career with the U.S. Department of Agriculture's Agricultural Research Service in Stoneville. He was responsible for developing many of the soybean varieties grown both in the South and locales around the world with similar climates.

Phillips said Hartwig was "known worldwide for his soybean genetics research," adding that both the scientist and his wife "had a passion for furthering soybean production and management systems on a global scale and saw the research at MSU as an integral part of fulfilling that mission."

Calling the Hartwig recognition "a tremendous honor," Reynolds said he sees the endowment as an "opportunity to refocus my research exclusively on soybeans.

"My hope is that this chair will not only provide the soybean producers of Mississippi valuable short-term returns, but also serve as a living legacy gift that will benefit producers for years to come," he added.

Prior to his appointment to the Hartwig Chair, Reynolds held the Dr. Glover B. Triplett Endowed Chair in Agronomy. His replacement in that position is expected to be named in the near future.

For more about the plant and soil sciences department, visit www.pss.msstate.edu.