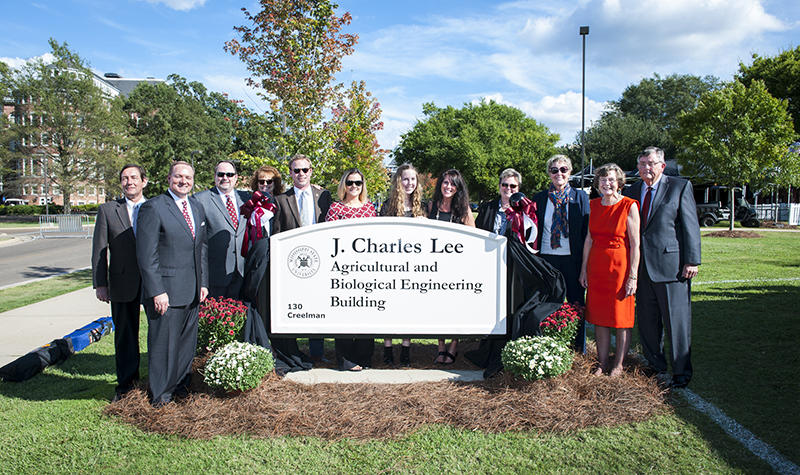 The $11 million structure that opened in 2007 is located on Creelman Street between Dorman Hall and McCarthy Gymnasium.

MSU President Mark E. Keenum said Lee made numerous outstanding contributions to Mississippi State during more than a dozen years of service at the university, and his many positive impacts continue to benefit the institution.

"He set access for students and academic excellence as twin priorities," Keenum said, adding that Lee significantly strengthened Town and Gown relationships with the community and improved appearance and functionality of the campus during his tenure.

"The very building that we are dedicating today was able to be built under his leadership," Keenum said. "The programs housed here are among the academic jewels of our university."

Mississippi State is home to the region's oldest agricultural engineering program and one of the nation's first in biological engineering. University officials have said the state-of-the-art facility enables the 136-year-old land-grant institution to continue setting benchmarks in these fields.

Vice President of Agriculture, Forestry and Veterinary Medicine Greg Bohach said Lee had a vision in 2002 for the agricultural and biological engineering building that came to fruition after he was able to successfully share his vision with the Mississippi legislature, which approved funding (bonds).

Dean George Hopper of MSU's College of Agriculture and Life Sciences said it was fitting that the building named for Lee is centrally located in the heart of campus.

"Dr. Lee worked toward collaboration and corporation. Surrounding this building is our university, and it's very fitting," Hopper said.

Lee said during his own remarks that the agricultural and biological sciences program highlights the best of the modern land-grant vision.

"The thought of having my name on a facility that will help educate and create a bright future for thousands of students fills me with tremendous pride," Lee said.