A Legacy in Research 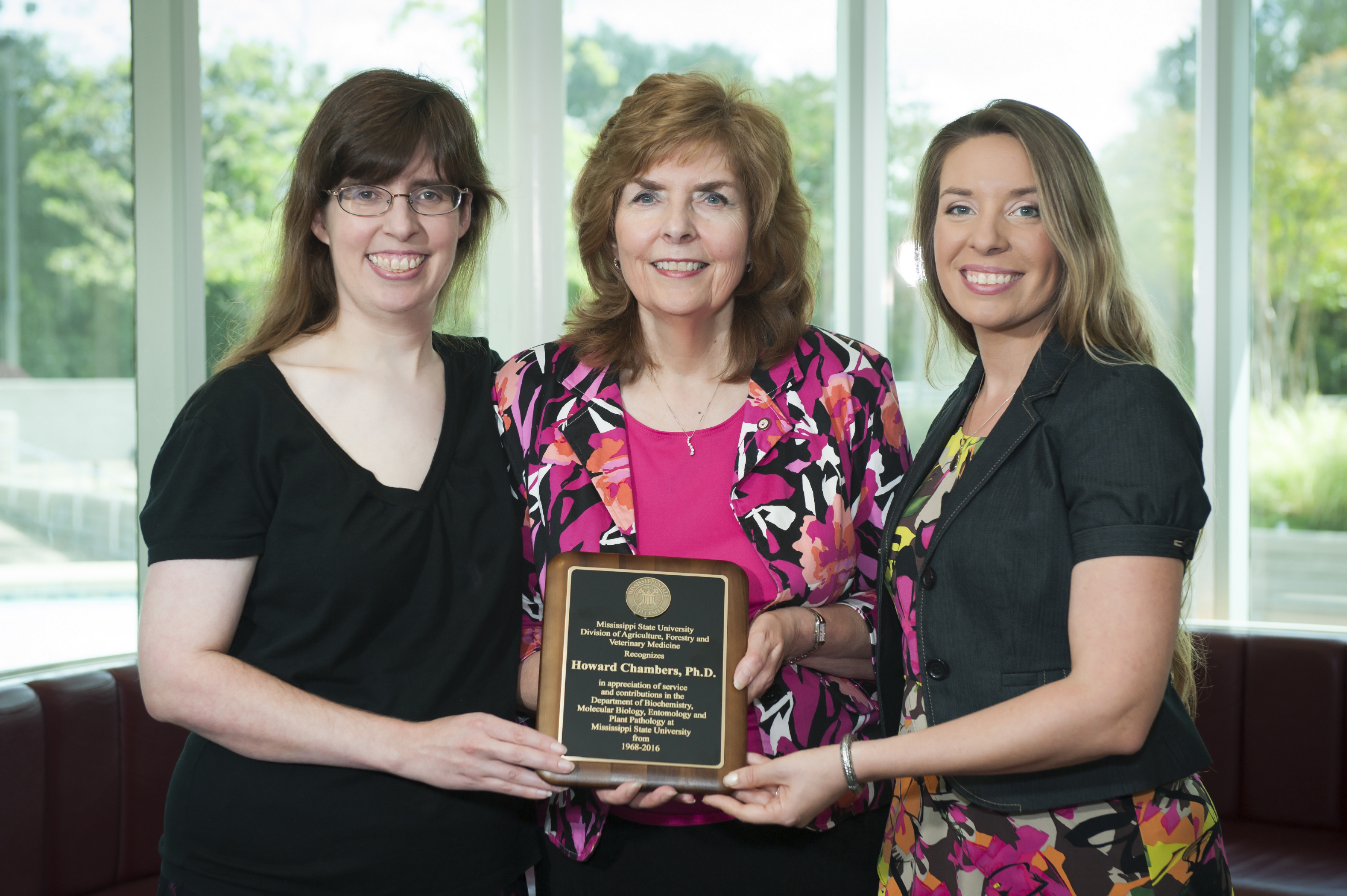 Caption: Jan Chambers, center, has endowed a scholarship in memory of her late husband and former MSU faculty member Howard Chambers. She is pictured with her daughters Kristen Funck (left) of Harrisonburg, Virginia, and Cheryl Chambers (right) of Starkville. (Photo by Russ Houston)

A recent commitment from Janice E. "Jan" Chambers, MSU Giles Distinguished Professor in the College of Veterinary Medicine and director of the university's Center for Environmental Health Sciences, has endowed a scholarship in memory of her late husband and former MSU faculty member Howard Chambers.

The Dr. Howard Chambers Endowed Scholarship will provide support to full-time undergraduate students. Preference will be given to Mississippi residents enrolled in life and physical science or math related majors.

A native of Buda, Texas, Howard Chambers received bachelor's and master's degrees from Texas A&M University and a Ph.D. from the University of California at Berkeley, all in entomology. In 1968, he joined the MSU College of Agriculture and Life Sciences' Department of Biochemistry, Molecular Biology, Entomology and Plant Pathology as a toxicologist, where he served for nearly 50 years.

"Howard loved his job and appreciated the environment that MSU provided him throughout his entire faculty career," Jan Chambers said. "He always felt fortunate to have a job where he could 'play in the lab every day and get paid for it.'"

During his tenure, Chambers developed federally-supported research programs initially focused on insecticide toxicology and more recently on improved nerve agent antidotes. His efforts, many of which included research collaboration with his wife, led to the invention and patent of several chemical compounds used in combating chemical warfare and furthering research for nerve agent antidotes.

"While Howard's scientific legacy will continue to be carried on by his research colleagues and students, I wanted to do something that would be a tribute to his time here at MSU," Jan Chambers said. "I chose to establish a scholarship because neither of us would have been able to go to school without scholarship support. It made all the difference in the world to the education we were able to receive."

A Berkeley, California native, Jan Chambers received her bachelor's degree from the University of San Francisco before earning a Ph.D. in animal physiology from MSU in 1973. In continuing the toxicology research she and her husband conducted, Jan Chambers recently was recognized as a winner of the 2017 Southeastern Conference Faculty Achievement Award for MSU. Howard and Jan Chambers were married for 47 years and have two daughters, Cheryl Chambers of Starkville, an MSU faculty member in the Department of Communication, and Kristen Funck of Harrisonburg, Virginia, a faculty member of James Madison University. Both are graduates of MSU.

An open fund in the MSU Foundation, the Dr. Howard Chambers Endowed Scholarship, may be increased through additional contributions. Furthermore, the endowed gift will provide perpetual support for future generations of Bulldogs.