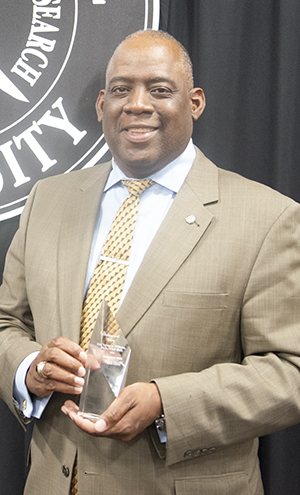 Colonel Williams served as seminar leader at National Defense University's College of International Security Affairs, Reserve Component National Security Course at Fort McNair in Washington D.C. He is a veteran of several military operations including Desert Shield and Desert Storm, Enduring Freedom, and Iraqi Freedom, just to name a few. He earned his master's degree in military operational arts and science from Air University's Air Command and Staff College in 2009. He will complete his doctorate in public administration at Jackson State University in Spring 2020.

He is past president of Jackson's Capital Club Board of Governors and has served on the CALS Dean's Advisory Council at MSU. He is a former member of the Mentoring to Manhood (M2M) Advisory Board, alumnus of Leadership Rankin, and life member of Phi Beta Sigma Fraternity, Inc., the National Guard Association of the United States, and the Veterans of Foreign Wars. Colonel Williams and his wife Sharon have two daughters: Shayla, an MSU graduate, and Zoe, who is currently attending Xavier University in New Orleans, Louisiana.