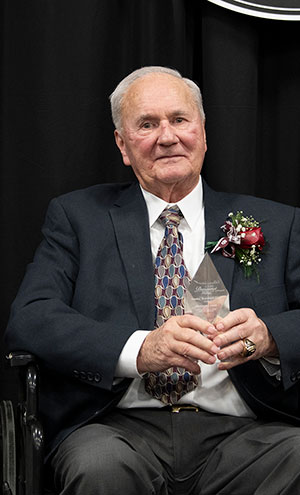 Mr. Stanley Gray earned a bachelor's degree in agricultural engineering technology in 1955. He owned and operated Dixie Farm Supply for nearly 40 years, becoming the first to install a bulk feed elevator in Mississippi, and growing to become one of the largest feed and fertilizer dealers in the state.

Gray joined the National Guard immediately after graduating from high school and remained active for thirteen years. His decision to join the National Guard was due to the guidance of Coach Bull Sullivan, his platoon sergeant and his football coach at EMCC. Stanley credits Coach Sullivan with inspiring within him a love for football, teamwork, discipline, and determination to succeed. In 2007, Gray was chosen as a distinguished Football Fellow at EMCC.

In 1956, Gray married Margaret Ewing of Brooksville and the couple has three children, four grandchildren, and two great-grandchildren. His three children and one grandchild graduated from MSU. The Grays are now members of McLeod's Chapel C.P. Church in Macon. For almost sixty years, Stanley Gray was active as a teacher, elder, treasurer, and superintendent in the Brooksville Cumberland Presbyterian Church until it closed in 2014. Gray gives credit for his success to God, his wife, Coach Sullivan, and MSU. One of his favorite mottos is, "You can do anything if you put your mind to it."